One part of William McKinley’s story that gets overlooked is the fact that he and Ida owned a farm in Columbiana, Carroll, and Stark Counties in Ohio. Dubbed “The Tariff Farm,” it had once belonged to members of Ida’s family. Ida inherited this farm shortly before becoming first lady.[1] The farm was located on Walker Road off Route 30 between Minerva and Bayard, Ohio. McKinley last visited this farm a few days before making that fateful journey to the Pan American Exposition in Buffalo, New York.[2] Animals raised on this farm included sheep, beef and dairy cattle. Additionally hay and apples grew on this farm. While there was the possibility that the land held a large quantity of oil, none was discovered.[3]

Jack Adams lived on and tended the farm. At one time, McKinley took a deep interest in the farm, however, issues arose during his Presidency which kept him from being a closer overseer of his farm. However, Jack Adams reported to the Chicago Tribune that:

“McKinley is a farmer,” said Jack Adams. “He keeps right in touch with everything that’s doin’ down this way. Nobody else knows, but you bet I know. The newspapers told all about the President’s worrying about battles and thing, but they didn’t know how much worrying he’s been doing about this farm. The papers said once the President set up all night to get the news from Santiago. But I know better. The President was awaiting to hear from me as to whether it was true that the chinch bugs were eating up th’ corn. Another time when the papers told about the big furrows in the Presidents forehead because of worrying about some foot transport or another, I knew very well that he was worrying about whether or not I ought to turn the cows into the west forty or put the land into wheat. An’ the President got so nervous he couldn’t hardly sit still that week. Old Dobbin fell into the well and it took two days to pull the poor critter out. Mister McKinley is a real farmer, and he’s got Farmer Bill Bryan beat to death.”[4]

Of course, “Farmer Bill Bryan” refers to William Jennings Bryan, McKinley’s opponent in the Presidential Elections of 1896 and 1900. Mr. Bryan had the support of farmers, while McKinley won the support of business and workers.

During this final tour of the farm, McKinley visited the entire acreage, noting that the corn was doing well, and adding that the pumpkins should be husked as soon as they were ripe. He also promised to build Jack Adams a new house, since the one on the property was “dilapidated.” However, it is not known if that house was ever built by the McKinleys. Mr. McKinley and his advisors ate a country dinner prepared by Mrs. Adams and her daughter. The President declared “that he never tasted such delicious roast pork in his life as the home-grown article he ate on his own farm under his own vine and figtree.”[5] After dinner, the President visited the henhouse, and also picked out a place for a new pigsty. He and his advisors then returned to Canton. 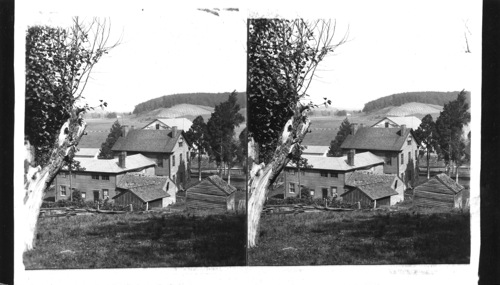 It was the red barn Dad always referred to as the McKinley place. He rented the land as a very young man from two ladies, the McKinley sisters. The sisters married brothers, and though they were the Spencer couples, the farm remained, in our language, the McKinley farm.

For many years, the sisters refused to sell, sentiment of the place they had once called home being their sole explanation. If someone had asked me when my father started farming that particular patch of ground, I only knew that Dad rented the farm for all the years that I could remember, contacting the McKinley sisters to work out the rental agreement year after year, the costs and profits split 50-50.

Eventually, with the failing health of one of the Spencer men, a sales agreement was reached and Dad purchased the farm, but it wasn’t until I was married with a family of my own. After my father’s death, this particular farm was sold.[6]

This is a picture of the McKinley farm. On the back the text reads “Late President William McKinley home located on Walker Road off Rt. 30 between Minerva and Bayard, Ohio- in Columbiana County. View shows original house and barn. Note Plain’s Cemetery in distance on Walker Road. August 26, 1956.” Measures 3.5″ by 3.5″ 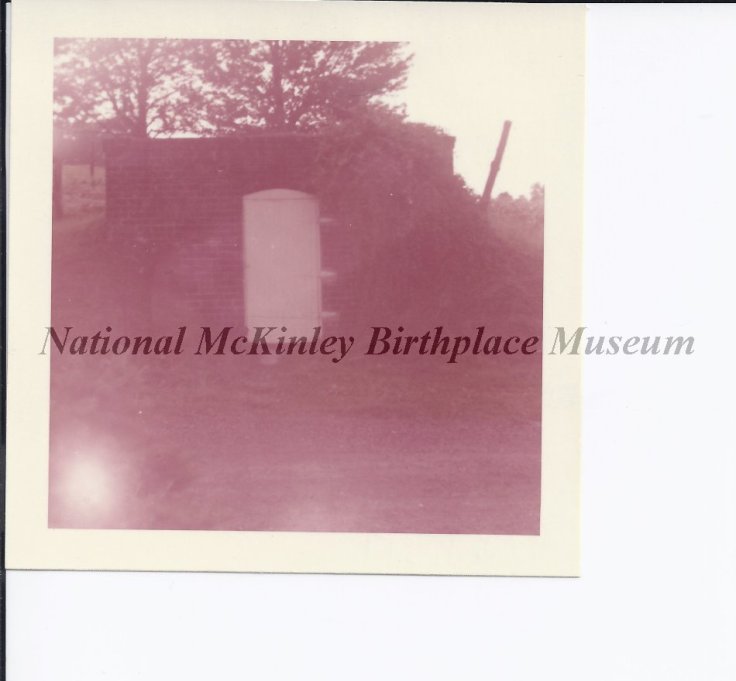 This is a picture of the cold storage at McKinley farm. The back has text that reads ” Cold storage care at Wm McKinley Farm on Walker Road in Columbiana County, Ohio, between Minerva and Bayard, Ohio.”