The modern Presidency includes many characteristics with which we are very familiar. One is access to the press. William McKinley is said to be the founder of the modern Presidency. Under McKinley as well as Theodore Roosevelt, management of the press would “evolve as a key tool of modern presidents.”[1]

McKinley traveled throughout his administration. He made a tour of the United States in 1898 in order to gain the public’s acceptance of the new territories gained as the spoils of the Spanish-American War. McKinley also traveled throughout the south in 1899 defending his policy about the Philippines. In 1901, McKinley made a cross-country speaking tour, which sadly ended with his assassination on September 6, 1901. According to historian Lewis Gould, “McKinley’s propensity to move about the country meant that the White House had to develop procedures to accommodate press coverage of these presidential events.”[2] These procedures included inviting the nation’s press to regular briefings by him or his assistants, thus establishing the forerunner of the presidential press conference. He understood the political advantage to be found in the use of mailings and printed propaganda.[3]

McKinley “enjoyed the company of reporters and did not regard them as adversaries,”[4] unlike his predecessor.  According to Gould, “Within three weeks of his inauguration, he had a reception for the journalists, where he remembered their names and faces.” McKinley and his staff laid the groundwork for a press room and press conferences. McKinley, rather than Theodore Roosevelt, arranged for journalists to have their own space outside the President’s office. The press had a room with a long table and chairs for the major newspapers and news services. John Addison Porter, McKinley’s first Presidential Secretary, and George Bruce Cortelyou, Addison’s successor each came and spoke frequently with the reporters.

Cortelyou developed procedures for releasing presidential speeches, McKinley’s annual message, and other statements in advance for the convenience of the newspapers. Since McKinley could not be directly quoted even though he gave interviews, one reporter said “McKinley contrived to put out, by various shrewd processes of indirection, whatever news would best serve the ends of the administration.”[5] Cortelyou began to compile the “current comment” which provided President McKinley with clippings from newspapers. Cortelyou supervised clerks who surveyed important editorial opinion. When McKinley wrote letters to editors and influential Republicans, the basis was on what he had read. Cortelyou kept a journal, noting that “the president sees everything, whether in the shape of mail, telegrams, or newspapers that can indicated the drift of public opinion.”[6] Cortelyou was as objective as possible, unlike some of his successor, whose news summaries only told the president what they wanted him to hear.

[Cortelyou] was doing most of the work of the presidential secretary. Discreet and polite, he treated all presidential callers with exquisite courtesy and respect. He saved his own views for the president and became McKinley’s closest daily adviser [SIC]. In his shorthand memoranda that he wrote on a regular basis, Cortelyou kept a valuable record of the administration’s decisions during the war with Spain.”[7] 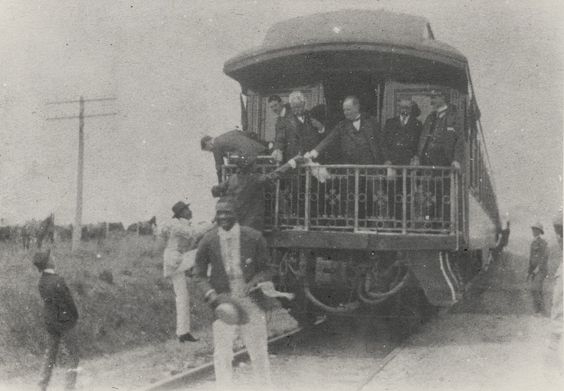 President William McKinley in College Station in May, 1901. He was on a train tour of Texas that eventually took him out to California. While on this tour, Ida McKinley became the first First Lady to visit a foreign country when she attended a luncheon given in her honor in Juarez, Mexico. While in California, Ida suffered an infected finger, which very nearly killed her. Plans to end the trip in Buffalo at the Pan American Exposition changed, with the trip to Buffalo being rescheduled for early September, 1901. McKinley was shot there on September 6, 1901, and died eight days later. Photo courtesy https://www.pinterest.com/pin/249316529344539436/.

According to Gould, When McKinley travelled Cortelyou realized that the presidential train had to be treated as a presidential office. Six stenographers accompanied McKinley and Cortelyou on these trips. Cortelyou used the stenographers to make certain that reporters had an accurate text of the president’s speech within a few minutes of McKinley’s speaking. In one case, the speech was transcribed and given to the reporters just before the president’s train left the station. In fact, it resulted in something more: it generated human0interst stories about the president’s daily activities and the people he met. Reporters put these into their stories, thus placing the President in a favorable light.”[8]

According to Gould, Cortelyou functioned as both a kind of chief of staff and a press secretary. In time, it would prove logical to divide these functions. Similarly, the fivefold growth in support staff from six clerks to thirty pointed toward even larger bureaucracies. Though no one would mistake McKinley’s presidential train for Air Force One, the performed similar operations.”[9] Thus McKinley and Cortelyou opened the doors for the creation of the modern American Presidency.

[3] Miller Center at the University of Virginia, “William McKinley: Impact and Legacy.” Retrieved 7.28.2016 from http://millercenter.org/president/biography/mckinley-impact-and-legacy