Prior to 1898, the United States was an isolationist nation. Unlike the British, we did not have holdings in foreign lands. The United States heavily taxed imported goods, which in turn supported American companies and American workers’ jobs. The Protective Tariff, as it was called, was strongly supported by Representative William McKinley. In fact, it was so highly supported that McKinley sponsored a tariff, called the McKinley Tariff, which passed in 1890.

The United States did not need a foreign policy until the end of the Spanish-American War. Spain and Cuba had been at war for a number of years, as Cuba wanted its independence from Spanish rule. In fact, the push for the United States to become involved in this war occurred on February 15, 1898, when the battleship, the USS Maine was sunk in Havana Harbor. The belief was that the Maine had been torpedoed by the Spanish while it was sitting at dock in Havana Harbor, protecting US citizens living in Cuba at the time. The loss of life was some two hundred sixty-six souls on the ship. The press and the public here in the states began their unrelenting demand that McKinley send troops to Cuba, to avenge the Maine’s sinking. “Remember the Maine, to hell with Spain” became the call to arms. 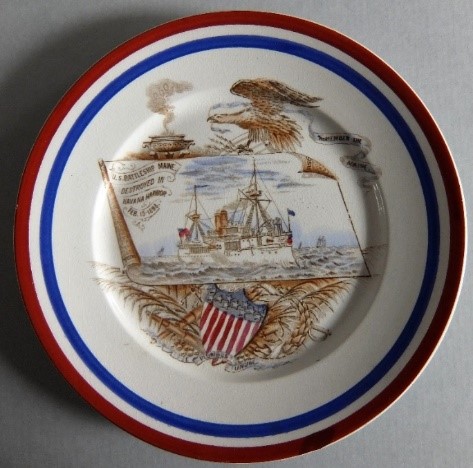 A commemorative plate with a painting of the USS Maine. The front shows an eagle at its nest with a banner in its mouth that reads “Remember the Maine.” The inset banner carried in the eagle’s talons shows an artist’s rendering of the Maine, with the inscription “U.S. Battleship Maine Destroyed in Havana Harbor Feb. 15, 1898.” The edge of the plate is rimmed with stripes of red and blue. The back of the plate is plain white. Plates, glassware, and other items were used to incite the public in the call to arms. This plate is part of the permanent collection of the National McKinley Birthplace Museum.

Additionally, the press published reports of Cubans being tortured by the Spanish in order to coerce McKinley to action. McKinley, ever a careful man, knew that the United States military was not ready. And so he waited two months, until he was assured that the military was prepared for war. Congress declared war, and troops went to Cuba. The war lasted approximately one hundred days, with the Cubans being granted their freedom in early July 1898. The United States remained in Cuba until a stable government was established by the Cubans, and then withdrew. As part of the armistice with Spain, the United States also gained the territories of Guam and Puerto Rico.

1898 Cannon from the Spanish American War. Cast by B & R Company, this “big gun” is made of iron, with wood spoke wheels. It measures 40 X 40 X 41 inches. It is on display at the National McKinley Birthplace Museum.

A pictorial chart showing prominent leaders of the Spanish American War. Note that Theodore Roosevelt, at that time leader of the Rough Riders, is given special prominence by the central placement of his image. This chart is part of the National McKinley Birthplace Museum’s permanent collection.

A map from 1899 of the Philippine Islands. The Philippines at the time of this map had recently been taken as a possession of the United States under the Treaty of Paris at the end of the Spanish–American War (December 10, 1898), and the map shows the southwestern boundary of United States possession near the British controlled North Borneo. Major cities and ports, rivers, terrain, and coastal features of the island group are shown. An inset map details the Pacific island of Guam, also claimed as a possession by the Unites States under the Treaty of Paris. Longitudes from Greenwich are given at the top of the map, with longitudes from Washington at the bottom. Map courtesy Maps, Etc. http://etc.usf.edu/maps/pages/4500/4582/4582.htm

The stage at the National McKinley Birthplace Memorial in Niles, Ohio displays fifty state flags, as well as four territorial flags. The stage  reflects the United States’ move toward imperialism during McKinley’s Presidency.