Today, presidential hopefuls use the media widely for publicity. With this election, it is not unusual to turn on the television news or see a candidate on the internet. Several times a day we see candidates making speeches about issues, shaking hands with voters, etc. Thomas Edison, inventor extraordinaire, made a short film of McKinley, making him the first President to appear on film. In this film, Historian Carl Anthony describes McKinley as looking a bit “reluctant, even a bit bewildered by the whole process.[1]” This historian was reminded of the way people act when they are unused to being filmed, as in old home movies. The movements are awkward, and seem a bit ingenuine. McKinley is walking across the front lawn of his home in Canton with an unidentified companion (perhaps Mark Hanna, his campaign manager). McKinley’s companion hands him a note, which says that he’s won the 1896 Republican Presidential nomination. McKinley then tips his hat, puts on his glasses, reads the note, then goes on his way. This reaction is very typical of how unruffled McKinley usually was. 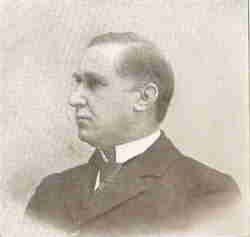 According to Anthony, “He was coaxed into doing it by his brother Abner McKinley, one of those classic get-rich-quick fellows always with a new scheme for making money and a propensity for getting free railroad passes. Abner was an investor in one of the very first “moving picture” companies and he felt sure that getting his brother as one of the subjects would boost interest in the new technology.”[2]

And so began the practice of capturing Presidents on film. McKinley’s first Inauguration was also the first Presidential Inauguration captured on film. We see the crowd making its way toward the Capitol. Then several shots of the parade are shown. Finally, we see President McKinley speaking to the crowd.

Sadly, McKinley’s death announcement at Milburn House in Buffalo, New York was also the first to be captured on film. We see a crowd waiting in the front yard, and then a procession including President Theodore Roosevelt approaching the house.

Years later, the assassination of another President, John F. Kennedy, would be given world-wide television coverage that lasted three days. And of course, other assassination attempts, such as those on Presidents Ford and Reagan, were also captured on film. But, it took McKinley giving the go-ahead to get all of this Presidential film coverage started.