In honor of Election Day, we present memorabilia from the 1896 Presidential Election. This was the first election in which campaign buttons and other ephemera were extensively used. Note that many items feature McKinley’s image.

Tile made by the American Encaustic Tile Co. of Zanesville, OH. It was used in the 1896 Presidential campaign.

Parasol used in the 1896 Presidential campaign. It features the campaign slogan, “Patriotism, Protection, and Prosperity.” 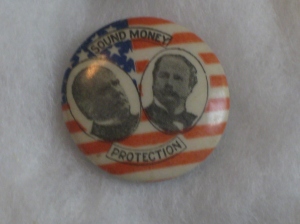 Political campaign pins had just been developed, and the election of 1896 was the first time they were used extensively. they were literally a visual means of the candidate getting his stance on the issues out before the public. This one features images of McKinley and his Vice Presidential running mate Garret Hobart, along with the terms, “Sound Money” and “Protection.” 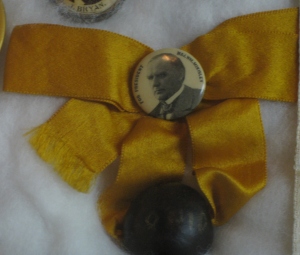 A campaign ribbon. Note “Ohio” is written on the bead.

The head of a McKinley head cane.

A razor. Note that even Ida’s image was used on this one!

A gold bug pin. McKinley supported the gold standard, and was known as the “Gold Bug.”