September 30, 1914    Joseph Butler visited Henry Clay Frick, and received a donation of $50,000 for the starting cost of the McKinley Library addition. Butler visited Frick at his home in Pittsburgh to seek a donation for construction of the memorial building and advice on funding the public library addition. When Frick learned that the starting cost of the library would be $50, 000, he went to his study and wrote a check for that amount. The only stipulation was that his name not be part of the name of the library. In recognition of Henry Clay Frick’s support, Butler commissioned John Massey Rhind to create this bronze 37″ (93.98 cm) bust of Frick. It was placed in the center of the library’s lobby. Frick continued to support the library and memorial after they were constructed, including donating 1, 000 new books in 1919 to double the size of the existing collection
From Ohio Memory Project, ‘Henry Clay Frick Sculpture,” Retrieved 4.7.2015 from https://server16007.contentdm.oclc.org/cdm4/document.php?CISOROOT=/p267401coll36&CISOPTR=10174&REC=9. 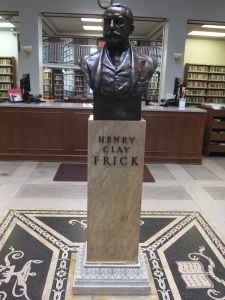