While we do not have a photo of the McKinley’s second daughter, baby Ida, who died at three months old, we do have a photo of the McKinley’s oldest daughter,Katherine, or Katie, as she was affectionately known. The note to the right tells the whole story. “Little Katie was named for her grandmother Katherine. Out of the oval looks her sweet, serene face with tender, trusting eyes.

Katie lived to be three and a half years old, twining about her parents’ hearts the soft tendrils of her baby love.

Her little sister lived to be but three months old. Lovingly, she had been given her Mother’s name ‘Ida.'” 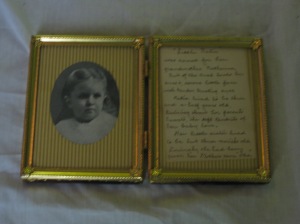